Democracy or Trade in the age of Globalisation?

Exploring tensions between increased globalisation and the notion of citizenship

A proposed trade deal between Britain and the USA has been reduced in the media to one issue: chlorine chicken. The unappealing way the US food industry washes its poultry has become a symbol of how global trade fundamentally affects many aspects our lives. Indeed it goes well beyond food standards. Trade deals today can constrain our government’s ability to protect our privacy online, to provide public services like the NHS, and to deal with climate change.

And if we follow that story, we’re faced with even more profound questions about our democracy and our citizenship. For if our society can be changed by trade deals, and by extension by international businesses and markets over which we have little control, then what does our democracy amount to? What power do we really have, as citizens, over the place we live?

If we scratch beneath the surface, we find that the contradiction between a powerful global economy and our democratic rights often lies at the heart of the most pressing issues of the day, from Brexit to the presidency of Donald Trump, from the raging farmers protests in India, to the intense disputes about who gets coronavirus vaccines first. 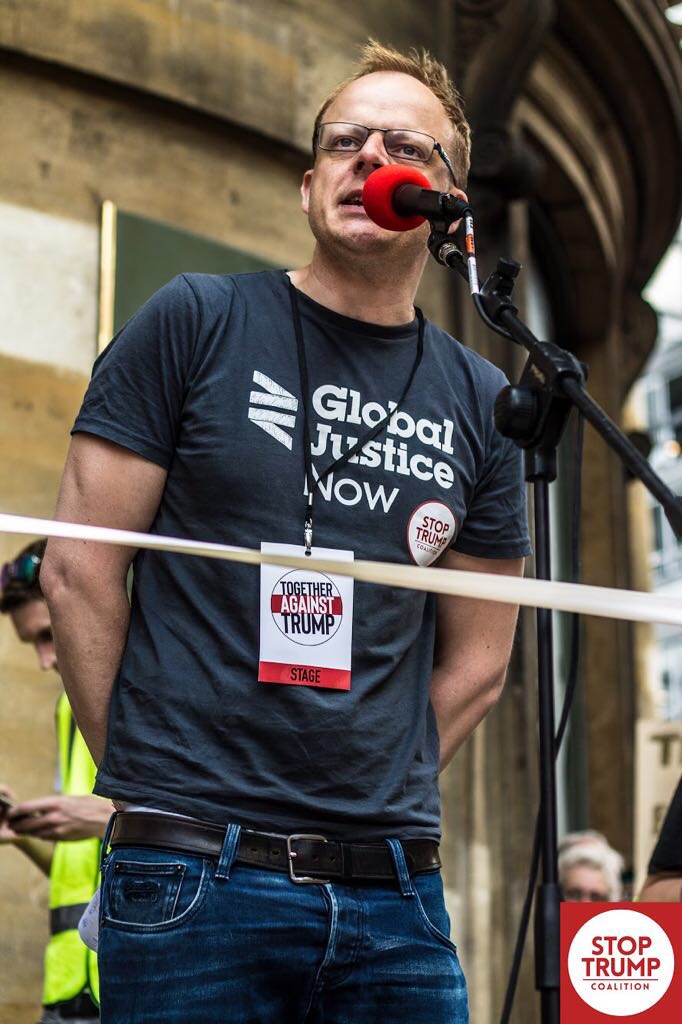 The power of trade deals

Let’s start with chlorine chickens, and explain how trade deals can change our food standards.

Animal welfare standards in the US are very different to our own, and farming is carried out on an industrial scale. Many chickens are kept in extremely confined conditions where they can barely move, cluck or eat, never see sunlight, regularly suffer heart attacks because of their unnatural size, and are covered in sores.

Washing poultry in treatments such as chlorine dioxide is a common way of removing the bacteria accumulated over a tortured lifetime for the animal – hence chlorine-washed chickens. Similar poor conditions means cows and pigs are also injected with antibiotics, steroids and hormones, speeding up growth and preventing illness which would otherwise proliferate in such conditions.

In Britain, while our standards are not perfect, we produce food very differently, embracing a so-called farm?to?fork method where sustainability and animal welfare are protected to some degree and the use of dangerous chemicals is reduced. We don’t allow food into our market which doesn’t meet basic welfare standards.

But modern trade deals are all about removing barriers to goods being traded across the world. In trade terms, things like food standards are too often seen simply as a barrier to trade. So during trade talks, negotiators try to level standards, by saying that two products must be treated the same, even if they are made differently.

This might be fine if two goods really are equivalent, but when they are not – as is the case with food production – labelling this equivalent means letting food produced to lower standards into our shops, and that makes it impossible for our current food producers to compete. They either face bankruptcy or they must pressure the Government to our own standards too; a sort race to the bottom which the global economy has become synonymous with.

Food standards are only the tip of the iceberg. Trade deals try to make it as easy as possible for not only goods, but also services (think insurance, or legal services, telecommunications, or even health and education) to be traded across the world as easily as possible too. This means trade deals can change how easy it is to run public services. Think about our railways. Many people, according to opinion polls, want railways brought back into public ownership. But under a US trade deal, a government could find this difficult, because it would likely be interpreted as ‘unfair’ to US corporations who want to bid to run parts of the rail network and assumed they would be able to at the time the trade deal was signed. The government has tied its own hands – and that of future governments.

Or the NHS. Currently the NHS can negotiate, to some extent, the price it pays for medicines, which is how we pay far less for drugs than Americans do. The US government says this treats US-based pharmaceutical companies ‘unfairly’ and the NHS should have to accept whatever price the pharmaceutical industry demands. They can essentially write this requirement into a trade deal.

The upshot of all this is that trade deals give huge powers directly to big business. Under modern trade rules business gets a right to challenge government regulations they don’t like. In fact, they often get their own special legal privileges, allowing them to sue governments for doing pretty much anything they don’t like. Real life cases include Australia being sued by a tobacco company for putting cigarettes in plain packaging, or a current case where the Netherlands is being sued by an energy company for phasing our coal fired power stations.

These cases are brought in secret, in special arbitration panels which we, as citizens, have no right to access – which is why we call them ‘corporate courts’.

One new area of trade policy is digital trade, recognising the fact that increasingly we shop online. These digital chapters give huge power to tech giants like Amazon, Google and Facebook to challenge governments – in the name of making it easier for them to do business abroad – for introducing policies designed to protect our privacy, fight online harms or even levy special taxes on these enormous corporations which are renowned for tax dodging.

In fact, it gets worse still. The sorts of changes described above would normally require new legislation, public debate and parliamentary scrutiny. These are rights, we’ve won over many years of struggle. They go to the heart of our citizenship. But trade deals – at least in Britain at the moment – bypass these democratic mechanisms. As international treaties they are negotiated under the so-called royal prerogative – with the power of the monarch. MPs cannot properly scrutinise the negotiations, they can’t approve or reject the government’s negotiating objectives and they can’t stop a trade deal passing into effect, however much they may dislike it.

Given how these deals touch upon so many areas of our lives, this is an unacceptable democratic deficit.

Citizenship in the age of globalisation

Trade is just one example of the way increased globalisation – the faster flow of goods, services and money around the world – has changed our lives profoundly. Not all of these changes are bad of course. Trade in and of itself is not good or bad – throughout history it’s been a fact of life. What matters is how trade is regulated and in whose interest – and what rights we as citizens are left with.

The global economy has grown up with very little input from ordinary citizens. Sure, we can vote our own government out of power. But the lesson of the last few decades is this often makes less difference than we would like, because whoever is in government faces the rules of globalisation – rules which have come to embed the interests of a really tiny but powerful section of society.

The sense of frustration, anger, and powerlessness which many people feel today is related to this disconnect between a global economy which shapes our lives and a sense of citizenship still connected almost entirely to the nation state. This frustration is in many ways driving our politics.

There are many ways to interpret the Brexit debate in Britain, but at one level it was precisely about this question – how do we reconcile ideas of citizenship with a deeply interconnected global economy, where decisions about our lives are often disconnected from our electoral system, leaving us powerless in the face of global economic forces. For many supporters of Brexit, leaving the EU was a chance to regain control over our lives by reasserting the connection between our rights and the nation state.

But many remainers argued that leaving the EU wouldn’t prevent us being subject to global economic forces. Indeed the trade deals the government is currently signing could actually leave us with less power to challenge those forces. Many remainers argued we should instead try to recreate the idea of citizenship at a level above the nation state – in this case the EU. Indeed, for all its many flaws, the EU can be seen as a way of balancing a purely economic relationship between countries with institutions that can give us real rights – the European parliament and court being the most obvious examples.

This debate will continue because the problems the world now faces – whether the threat of pandemics, catastrophic climate change or global inequality – require international solutions. We can see it in India where millions of farmers are protesting at the moment because they don’t want farming to be increasingly opened to international market forces. You can see it in debates around coronavirus vaccines, where the production of medicines is dictated by global trade rules, preventing most countries in the world from manufacturing the medicines they need because they don’t have the patents. And you can see it in the election of Donald Trump in 2016, driven unquestioningly by racism, but also by a feeling that the global trade system had made people’s lives worse.

The solution of the last 40 years has been to leave fundamental decisions about our lives to global market forces. This has clearly failed to create a fair or a sustainable economy. The great challenge of our age is how to control those forces in a way that gives people power over their lives.

Nick was a leading voice in the UK and European movement against the now?abandoned EU?US trade deal (TTIP) and a founder of the UK’s Stop Trump coalition. He regularly contributes political analysis to publications including The Guardian, Al Jazeera, Open Democracy, Red Pepper and Soundings journal.

Looking back, pushing forward: read our Annual Report for 2021/22