Light at the end of the tunnel

I spent last Saturday at the stunning Royal Courts of Justice at our Magistrates’ Court Mock Trial Competition National Final. Dressed in my smartest clothes, it was an event only made possible by the good-will of an army of Young Citizens volunteers.

This Saturday it was my turn to volunteer and lend a hand to my community.

Close to where I live there’s a much used, unloved cattle arch – a tunnel built to go under the mainline railway probably back in 1840. At one time people used the tunnel to take their cattle to market now it is used by children to reach the local primary schools without crossing roads and by dog walkers on their way to the local parks. In 2010 the local youth group did a great job of renovating it, creating a vibrant jungle scene. Nine years on, the kids involved must be in their mid-twenties, the youth group has closed and lazy graffiti covered their artwork.

Then, around 6 months ago a stolen motorbike was taken into the tunnel and set fire to. Thick black soot took the meagre light away and the smell of burnt plastic and oil lingered. Everyone now hated it… many now avoided it. Some thought about doing something about it, posts on the local Facebook group, emails to the council to ask who was in charge – I certainly talked about how ‘something should be done’.

And then one local person stepped forward to take a lead. Jeff, my neighbour of many years but whom I’d never spoken to, decided to make a difference. He reached out to our local councillor to gain permission and successfully secured a small grant from CIF, the cleaning company. They were keen to film the project and Jeff got onto social media and mobilised the community. 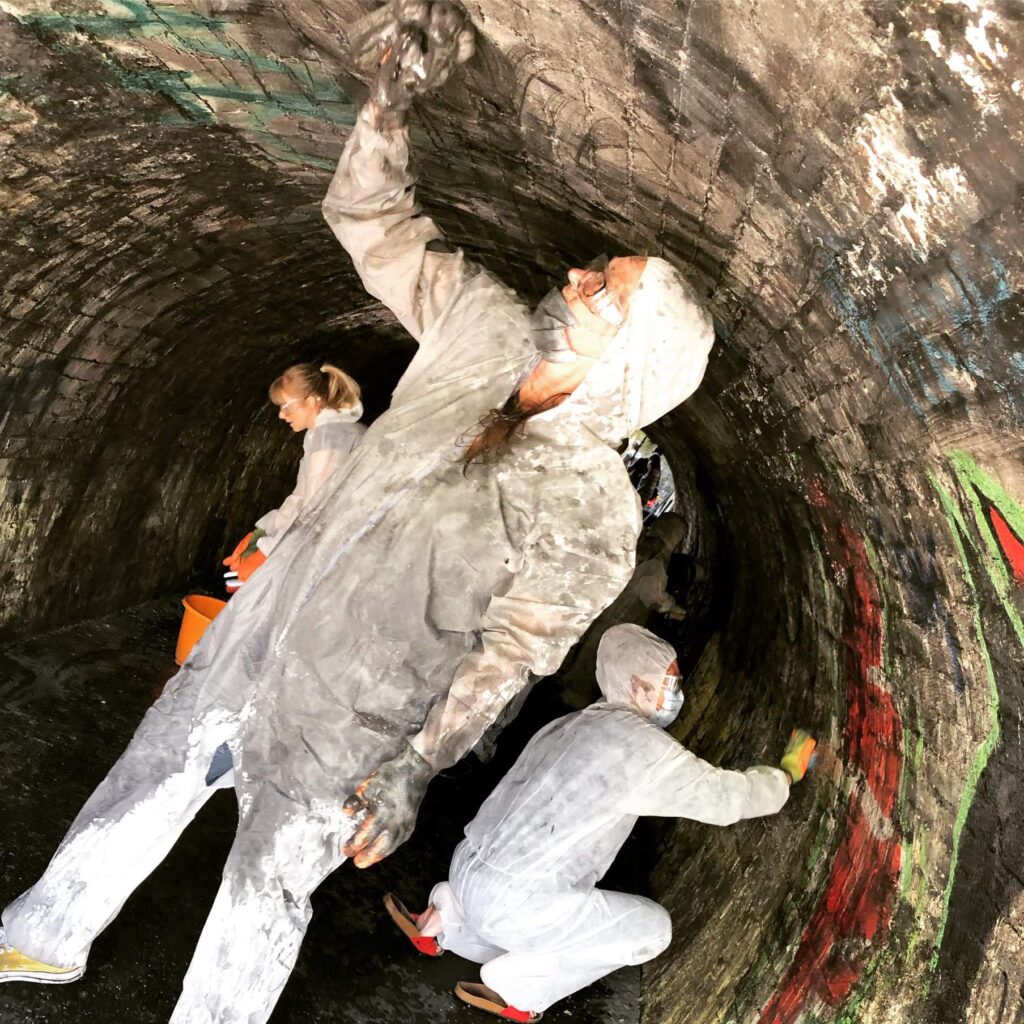 So, on Saturday me and many others, from the very young to the not so young, donned overalls and picked up our scrubbing brushes. The youngest (and probably the most industrious workers) were aged around 5. A local business kept us fed and watered with coffee and sandwiches, another business let us use their hosepipe and water. And as various strangers from the local community came together and scrubbed, we got covered in dirt, found out each other’s names and we chatted and laughed…

The next step is to paint it white and then source a local artist to work on a design that can incorporate the artwork of local children or young people. But already the tunnel is brighter and next time I walk through it I’ll be proud of our community and proud to have chosen to be part of it.

But volunteering in your local community has given me much more than a better walk to school with my son, it’s taught me 3 things:

ii) I’ve learnt that one person can make a change and that if you’re prepared to lead, others will follow

iii) I’ve also learnt that when people work together great things can be achieved.