This September marks 20 years since the publication of the Final Report of the Advisory Group on Education for Citizenship and the Teaching of Democracy in Schools, appointed by David Blunkett and chaired by Professor (later) Sir Bernard Crick.

The Report, with cross-party political support, launched Citizenship in the UK (England) as a compulsory National Curriculum subject and gave momentum for follow up reports on Citizenship in 16-19 Education and Training and Life in the UK for adult citizens and newcomers. Citizenship education appeared set to become an integral part of public and political life leading to the education and engagement of generations of active, informed, responsible citizens. All went well till the onset of the economic crisis and election of the Coalition Government in 2010.

Since then citizenship education has been constantly on the back foot:

The Conservative Government has adopted a much narrower view of Citizenship centred on civic knowledge, civic duty and volunteering, bolstered by fundamental British values and PREVENT. The latter are responses to threats to social and civic community brought by radicalisation, extremism, xenophobia and violence. Add to that the ongoing impact of Brexit and it is easy to see why the Blunkett/Crick vision of citizenship education seems a long way from becoming reality in UK life. 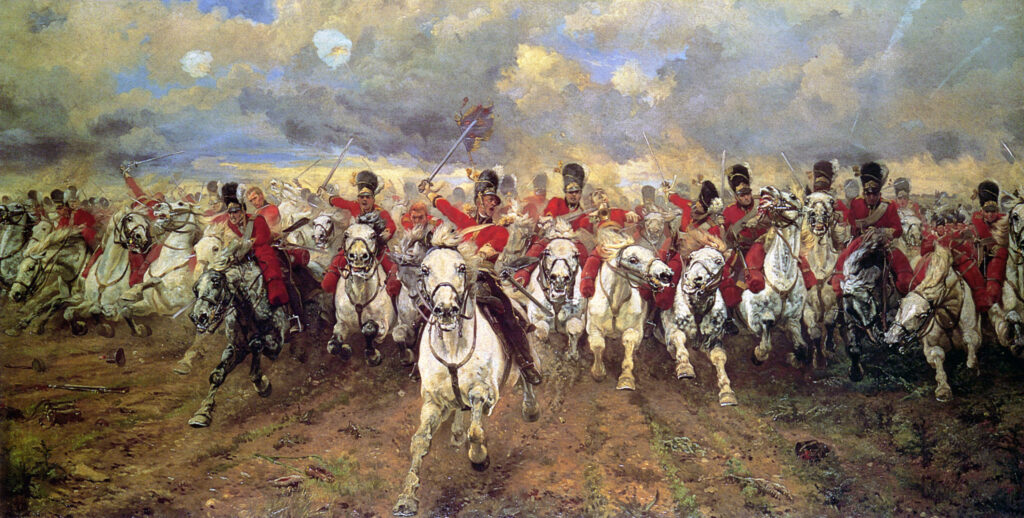 Elizabeth Thompson,Lady Butler’s 1881 painting of the charge of the Royal Scots Greys at the Battle of Waterloo in 1815.

Those struggling to keep the Citizenship flag flying high have been waiting some time for the cavalry to arrive with fresh supplies and reinforcements. The Ties that Bind is that cavalry and does not disappoint with the supplies: the 168 page report is packed with sound and welcome recommendations covering four broad themes:

3. Civic and democratic engagement, and

Together they are a package designed to resuscitate and reinvigorate the Blunkett/Crick vision for the establishment of long term programmes in schools and across society that educate people – young and old – about the interrelationships between state and citizen at all levels of life. The stark central message or rallying cry is that ‘the Government needs to rethink its commitment to Citizenship’ in order to rescue it from its current ‘parlous state’.

It is one thing to draw up and publish such a report but another to get the recommendations considered and acted upon by the Government and political parties. On the positive side, the:

They deserve to be carefully digested by the Government and acted upon. However, as yet, there has been no official Government response so the jury is still out. On a worrying note, the Report did not make much of a splash in the national press, the Conservative led media of the Times and Telegraph reporting only on the increased cost of the UK Citizenship test.

Let’s hope that this is not a portent of what is to come and that the Committee and its report marks a real turning point in the fortunes of citizenship education. Indeed, that this is only the vanguard and that greater reinforcements are on the way and that it comes to be seen as the landmark salvation of Citizenship in the UK and not its futile last stand. How fitting that would be on the 20th anniversary of the Crick Report that launched a coherent vision for citizenship and civic engagement.

The full report and summary can be accessed at: https://publications.parliament.uk/pa/ld201719/ldselect/ldcitizen/118/118.pdf

David Kerr, is Consultant Director of Education at Young Citizens and Head of Initial Teacher Training at the University of Reading. David has championed citizenship education for many years. He was seconded as Professional Officer to the Advisory Group on Citizenship and the Teaching of Democracy in Schools, chaired by Professor (Sir) Bernard Crick and then to DfE to help set up the infrastructure for the new subject. He directed the groundbreaking Citizenship Education Longitudinal Study (CELS) at NFER and was involved with the IEA Civic and Citizenship Education international studies. He has also led two Citizenship PGCE courses. He has worked closely in Europe with the Council of Europe and European Commission and remains active in practitioner, policy and research networks.